Statement regarding the devastating fires on Table Mountain

The Cape Town Heritage Trust is devastated to learn about the terrible mountain fire that has destroyed a large part of the cultural landscape of the Rhodes Estate, the historic Tea Room next to the Rhodes Memorial, several buildings on the main campus including the Jagger Library with its internationally significant collection of historic archival documents and books and the Fuller Hall residence. As I write this our office is enveloped in a pall of smoke and the sun is almost invisible.
Other buildings that have been destroyed include Mostert’s Mill, the historic windmill that was the only restored working windmill in the country, a historic house, Cadboll, that served as student accommodation, and several other historic buildings. Updates on the fire damage continue to stream in.

It is not only the historic buildings themselves that have been lost, but their contents and collections; a memory and resource of immense value to all South Africans and indeed the world. We do understand that the University community has been safely evacuated and that no lives have been lost, and for this we are truly thankful. It is also understood that an urgent meeting will be held to assess the damage to the Jagger Library collection and we look forward to learning more details on the extent and scale of the damage to the collection.

The Trust stands ready to assist in whatever manner we can and offers an opportunity for those who wish to donate towards the restoration of the buildings devastated by the fire. Donations may be made to the Cape Town Heritage Foundation, an arm of the Trust that holds funding in trust for such situations. The Foundation is a registered Public Benefit Organisation and has Section 18A status which enables the issuing of tax certificates of donation. For further information please contact our Office Manager, Mrs Nicolette Nunes on 021 4262157 or admin@heritage.org.za
To conclude, the Trust would like to add its voice to those of so many others who have reached out to support our wonderful firefighters and all the organisations that have offered assistance in this time of loss and chaos. Whilst the fires still rage driven by a gale-force south-easter and much of Cape Town sits under a blanket of smoke it is uncertain as to what further damage may occur.

Talk of the Town

Laura Robinson directs the all-important work of the Cape Town Heritage Trust from an idyllic cottage on the edge of the Company’s Garden in the heart of the Central City.

Article written by Kim Maxwell of the Daily Maverick

Liam Tomlin of Chefs Warehouse restaurants is involved in an exciting food adventure that focuses on supporting local goods. When it opens in November, Local at Heritage Square will be about good, local eating and drinking, and some old Cape architecture that’s been given a bit of spit and polish.

The location is Bree Street and some of its offshoots that form the central artery of Cape Town’s eating and drinking scene. Heritage Square is a block of inner-city historic buildings midway, framed by Buitengracht, Shortmarket, Bree and Hout streets. You’ll find Tomlin’s Chefs Warehouse & Canteen restaurant at 92 Bree, on the corner where Bree and Shortmarket intersect.

Heritage Square was donated by the City to the Cape Town Heritage Trust (an NGO and advisory body on heritage and conservation that also preserves architectural and cultural heritage). Trust director Laura Robinson says it’s dedicated to preserving architectural heritage and restoring historic buildings. The trust owns the freehold of about half the Heritage Square block, including a portion that extends across the inner courtyard to Hout Street.

“Originally the buildings at Heritage Square were in a very bad state,” says Robinson. “The plan was to demolish all these buildings and build a car park in the ’80s. There was such a public outcry that it was saved by public pressure.” Luckily for current restaurant tenants and Capetonians who care about preserving old architecture, the Heritage Trust was formed in the late ’80s. Some key Heritage Square buildings were donated to the trust by the City.

The trust’s website says the principle building in the development – what is now The Cape Heritage Hotel, at 90 Bree Street – had “suffered decades of neglect”, reducing the building “to a shell”.

Engelhorn is Tomlin’s landlord at Chefs Warehouse (CW), and his new partner in “restoring glory to an amazing piece of history and culture”. Local at Heritage Square will be their communal eating and retail collaboration. It’s scheduled to open in November.

The pair walked me through the partly renovated buildings. Aside from her leased Heritage Square sections, Engelhorn privately owns the original R Heddle & Co building, an expansive space running from Buitengracht (where HQ had its steakhouse booths) along a passage to Shortmarket Street. The site has been slowly stripped of multiple paint layers, cheap plaster and ugly electrical cabling.

“With its different layers, we missed the character of it. When you walk into the hallway from Shortmarket Street, the wall is rocks on one side and bricks elsewhere. Every medium reflects a different time frame.”

Engelhorn’s plan is to link Local at Heritage Square to Cape Town’s early marketplaces, when boats came in and farmers sold their produce. “When HQ vacated the Heddle building early in the year, I thought: what can I do with this space? I wanted to try to bring it back to the original. It’s huge, so wasn’t working as a restaurant,” she says. “Liam and I decided the best thing would be to create a space for local produce.”

Robinson says this building was originally a warehouse, and later the Heddle hardware store. All Heritage Square’s buildings were residential or warehouses.

“Riebeeck Square opposite [currently a Shortmarket Street car park] was used for parking ox wagons – called ‘outspan’ – for farmers to take their produce to Greenmarket Square to sell.”

Only local craftspeople are being utilised. “We’re changing things in places where cheaper materials were used – like those original wooden floorboards, replaced with cheap pine,” says Tomlin. He brought in Tessa Metcalf, one of two painting specialists painstakingly restoring original walls by grinding old bricks to create pigment powder, or creating patinas in complementary hues. Metal columns and industrial ceiling ducts now have a “rust” effect; other walls are distressed with paint and sanding techniques. A number of Cape Heritage Hotel reception and kitchen staff pitched in too, chipping away at interior plaster during months when the hotel was closed during lockdown. 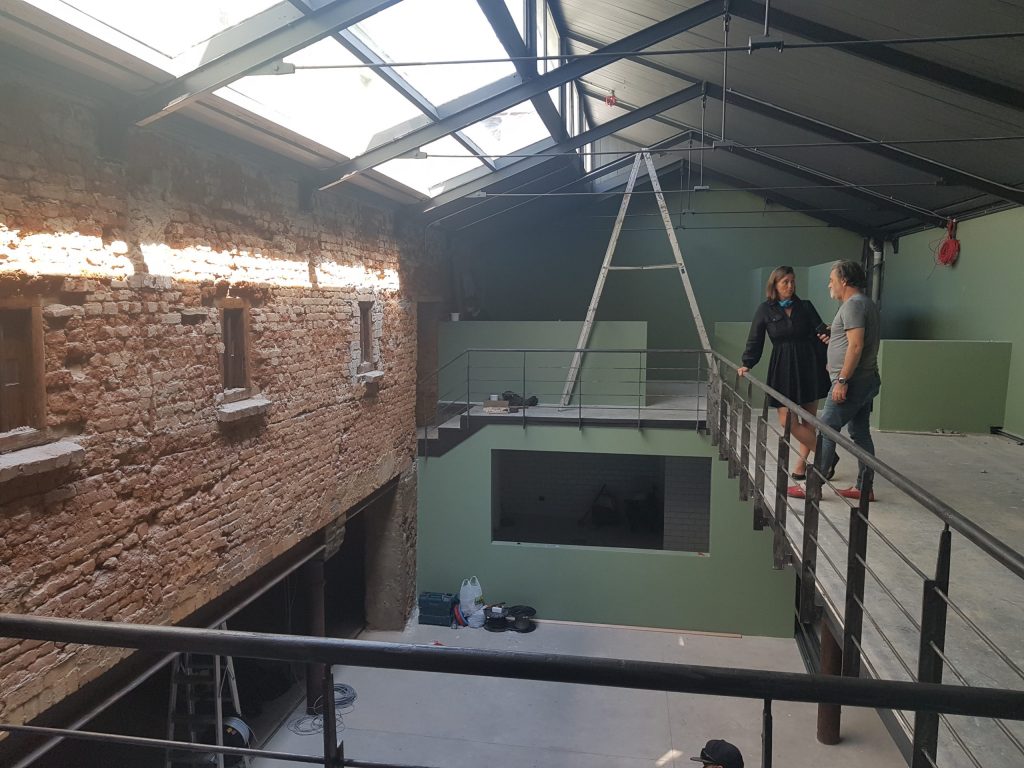 But let’s get to the food. As the name suggests, Tomlin will rope in independent suppliers to offer a grocer’s retail range downstairs, stocked 99% with local producers’ products. “It will have everything local, from olive oil to salt brands. You’ll be able to buy local fish, meat, charcuterie, cheese, bread and chocolate, oils, vinegar, fresh pasta and food to go,” he says. South African aprons, boards and kitchenware will be sold along with cookbooks (the exception, stocking of overseas titles).

Details are still being pinned down (for instance, a kitchen with green exterior walls will operate as a fishmonger). “You can come in and have a little plate of sashimi, or shucked oysters, or deep-fried squid and grilled prawns. There will be a selection of tapas-style seafood dishes.” Charcuterie and cheese platters will also be part of the mix. The ground floor eating-in concept is designed for flexibility.

Tomlin is opening a new restaurant and bar in the upstairs seated section. “Various friends looked at it. I was in the process of opening a restaurant in Beirut and had visited five or six times. Then they had that huge explosion. I was totally devastated. So in homage to Beirut, I’m opening a Middle Eastern eating bar called Mazza in Cape Town. It means to share.

“If you look at the Middle East, there are 17 countries. So we’ll do a flavour representation of those 17, but change them often. Very much in the style of how we operate Thali, we’ll do it with massive respect to the respective cultures and cooking techniques, but with our interpretation.

“Just think of all the flavours… saffron, lamb koftas, Turkish delight, tagines, hummus, ras el hanout spice, pomegranate, mint and cucumber, labne … Moroccan and Middle Eastern, cardamom. There is quite a representation of say, Lebanese, Iranian and Israeli communities in South Africa already.” Start googling and references pop up to “mazza” in Syria and Lebanon, or “maza” in Persia, which seem to link to the concept of mezze and tasting food.

“Mazza is in homage to Beirut,” says Tomlin. “For my soul, I’ll feel better doing it. We’ll do a huge mural on the wall upstairs. A full sit-down restaurant and bar, 55-seater. No reservations.” It will be run by two CW Beau Constantia chefs, Geoffrey Abrahams and Teenola Govender.

Flexible eating and affordability is key. “The whole idea of Local is you can come in and go downstairs to the charcuterie bar, have some oysters, grab a fresh juice, do some shopping. Or you can go up to Mazza and have four or five dishes and a local craft beer, without a massive bill. You order as few or as many as you want. Local is about designing around what you need.”

Downstairs, eating options will be spread around. Seating will be in the central space inside the Heddle building, or out in the Heritage Square courtyard.

A talking point in the Mazza space is three tiny wooden windows, set high in the old bricked wall. Speculating about whether the room might have accommodated slaves, Robinson says there is no evidence to suggest that Heritage Square was a slave holding area.

She points out that all private quarters had back rooms where servants were housed. “The Africa Café restaurant, on the Buitengracht and Shortmarket corner of Heritage Square (owned by the trust), was originally a double-storey residence. The Cape Heritage Hotel in Bree Street was probably a private residence.”

Tenants are still being added, but a “tiny shop” called Caffe Milano by Giorgio Nava is confirmed for the Shortmarket Street passage. “We’ll make local and Italian pastries and cakes, made by my long-time pastry chef Rugshana Naidoo. We’ll also be selling a new coffee brand from Café Mauro,” says Nava. “It will be like the original Caffe Milano we opened, but smaller.”

“The easiest part will be putting the wine list together – finding wines different from the CW wine list,” she says. “We’ve got so many wines that get overlooked. We all tend to stay with safer options.” Setti will stick to simple options: a classic G&T or craft beer on tap, keeping it artisanal.

Engelhorn and Tomlin are helping Setti on the operational side. “With so many businesses closing, we wanted to give people the space to sell their goods or start a small business in Local at a reasonable rent,” says Tomlin. A base rental by square metreage will apply, with a turnover clause for when things tick over nicely again. As a landlord, Engelhorn says she is committed to treating tenants fairly. “When we’re losing, we’re all losing. This brings a bigger sense of community. You’ll end up having tenants who are sharing common spaces and being respectful of one another.”

Similarly, Tomlin wants South African diners to feel comfortable at Local. Tourists are welcome, but he’s committed to supporting – and attracting – local, on every level. From the local craftsmen used for furniture, to food artisans and ceramicists’ beautiful plates. “It’s very important to us that Local at Heritage Square will be perceived as value for money.” He notes that few South Africans are immune to 2020’s financial downsizing. “They are not all going to be able to afford La Colombe or The Test Kitchen or CW. But they still want a night out and to feel they’re in a cool space, without a big price. There are a lot of people looking for that.” DM/TGIFood