Once destined to be a parking garage, the Bree/Shortmarket block in central Cape Town has now taken on a new guise, Heritage Square.

In the largest project of its type undertaken in the Mother City, the group of eighteenth century town houses, associated outbuildings and a warehouse have been restored by the Cape Town Heritage Trust and Shortmarket Properties. The restored complex includes a fifteen bedroom hotel, restaurants, retail outlets, offices and an operating blacksmith.

The evolution of the saga of the Bree/Shortmarket restoration project has its origins in a proposal to develop an extensive ring road system for the city. This proposed scheme would have entailed the demolition of the entire Bree/Shortmarket block, for a parking garage, as well as numerous old buildings on Hout and Shortmarket Streets, to allow for road-widening.

There was considerable opposition to the proposed Buitengracht Freeway and the demolition of the various buildings concerned, principally from the Simon van der Stel Foundation and the Institute of Architects, but with vociferous support from City Councillor Joan Kantey and various journalists, including Victor Holloway. A re-appraisal of the supporting planning criteria, and a recognition of the need to conserve the buildings, led to the abandonment of the proposed parking garage and road-widening scheme.

The Cape Town Heritage Trust was set up in 1987 and fourteen properties in Hout, Shortmarket, Loop and Long Streets acquired by the City Council in connection with the scheme donated to the Trust. Lengthy negotiations with the City Council led to the donation of the council-owned properties on the Bree/Shortmarket block in 1996. The agreement of the Provincial Administration, which had contributed 80% on the cost of acquiring the properties, to the envisaged scheme was critical and did much to make the project possible.

By far the largest project undertaken by the Trust, the scheme necessitated another partner and the Trust was excited to enter into a joint venture with Sam Montsi. Through this involvement the project became the first post-apartheid development in the inner city involving a black developer.

Given the complex nature of the project, an initial pre-contract investigation lasting six weeks was undertaken and did much to inform the conservation aspects. During this phase builders cleared away collapsed walls and the associated mess of years of neglect. At the same time, exciting discoveries were made, including an eighteenth century door with its original lock and handles bricked up on both sides. Archaeological excavations and scraping to uncover historical wall decorations were also very worthwhile. Removing this aspect from the main building contract reduced the cost implications of delays. Redesign to accommodate changes required by the need to save valuable previously unknown fabric was avoided by making these before letting the main contract.

The principle building in the development at 90 Bree Street had long been the focus of attempts to save the block. Unfortunately decades of neglect had reduced it to a shell, only saved by the erection of a temporary roof during the 1980s. In the yard of the building is to be found the oldest surviving grape vine in South Africa, estimated to have been planted in the 1770s.

As the project progressed it was found that 108 Shortmarket Street, with its much altered external appearance, offered the best opportunity for a traditional approach to restoration. Other buildings allowed for an exciting mix of approaches. As far as possible each building was handled so as to allow as many elements from the various changes over the years to be retained as possible. The result is an eclectic mix of building styles reflecting the character of Cape Town during the early nineteenth century. 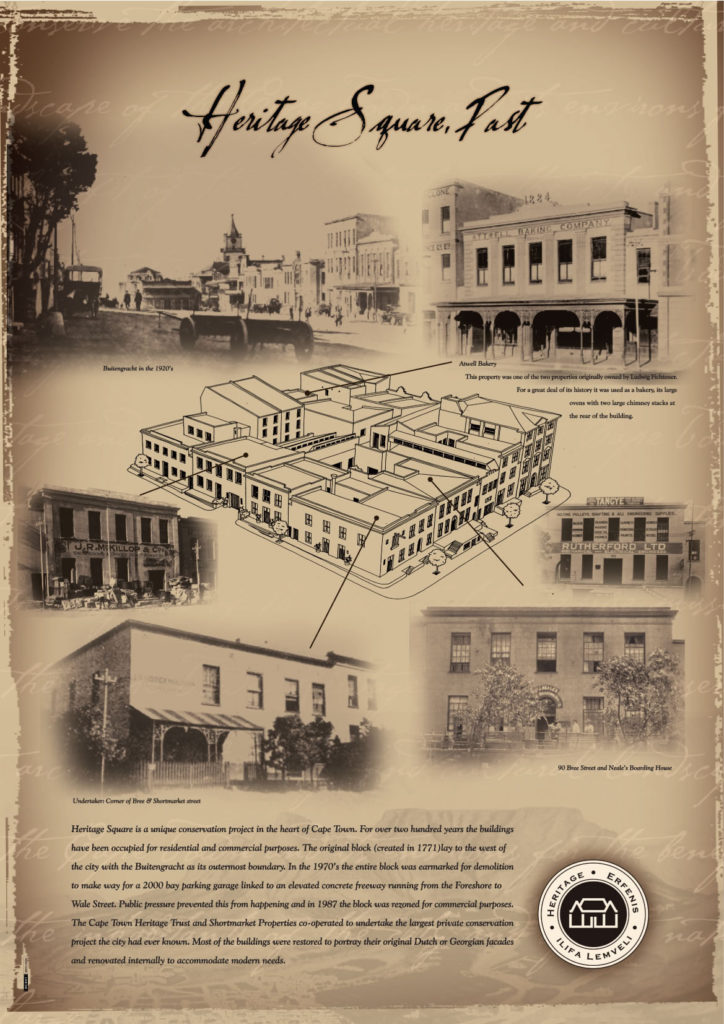 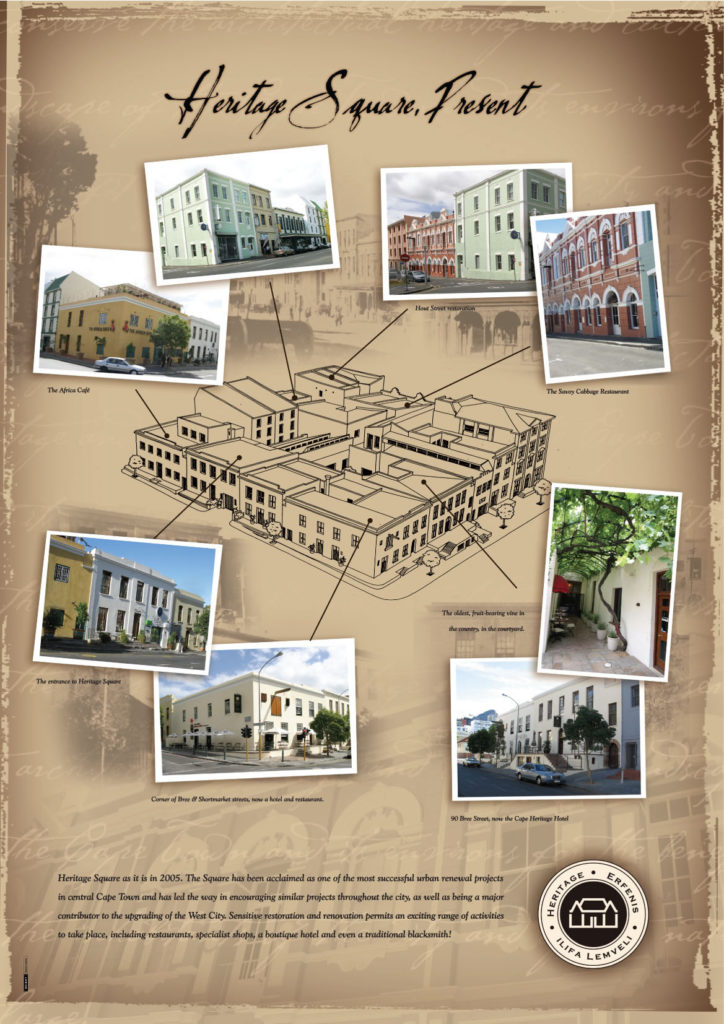 The Trust views itself as not being a preservation body, but rather one which engages in the overall integration of economic development and conservation. In this way the Bree/Shortmarket project aimed at making a contribution to the revitalisation of the inner city. For this reason a mix of usages which made the development open to public was considered vital. It was also essential that the project be commercially viable, one of the Trust’s aims being to show how good conservation and successful commercial developments are not mutually exclusive.

The professional team on the project included experienced conservation architects David van den Heever of GAPP and Trevor Thorold. Hennie Fagan, the structural engineer, had been involved in investigations on the buildings for the City Council during the 1980s and so was familiar with the challenges presented. The builders, Resnekov & Nielsen, responsible for projects including the Castle and Groot Constantia, once again illustrated their abilities on complex restoration projects. The involvement of project manager Tony Davenport was also critical to the overall success of the development.

Heritage Square has proved to be a truly exciting venture; delivered on time, on budget, revitalising the heart of Cape Town with a blend of authentically restored buildings, and providing a glimpse of what Cape Town was like two hundred years ago. 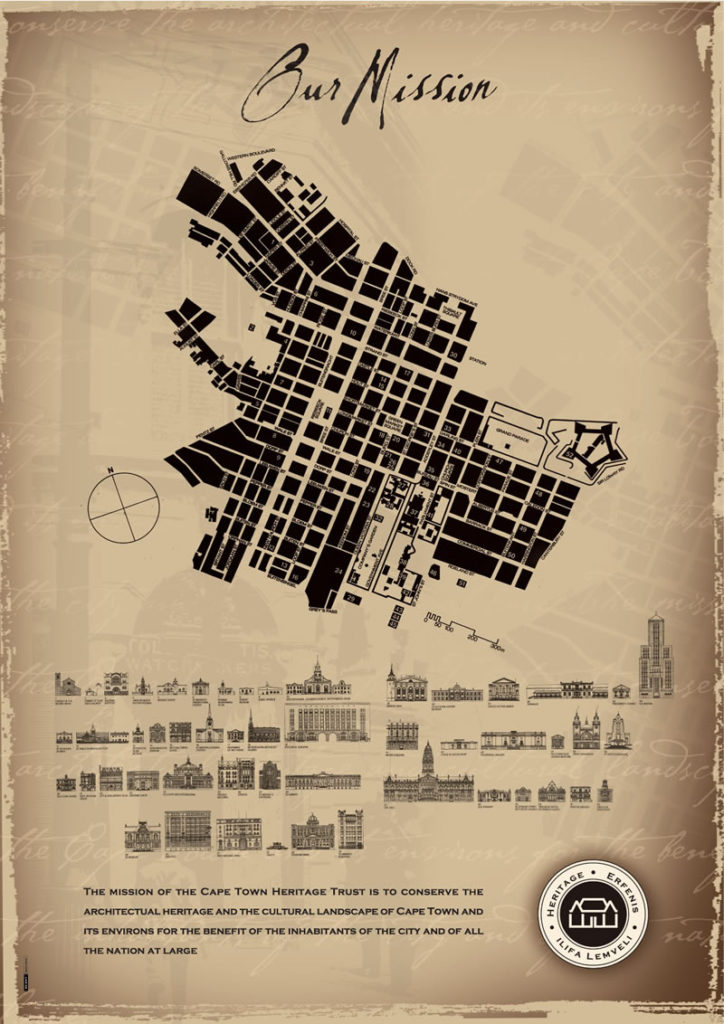 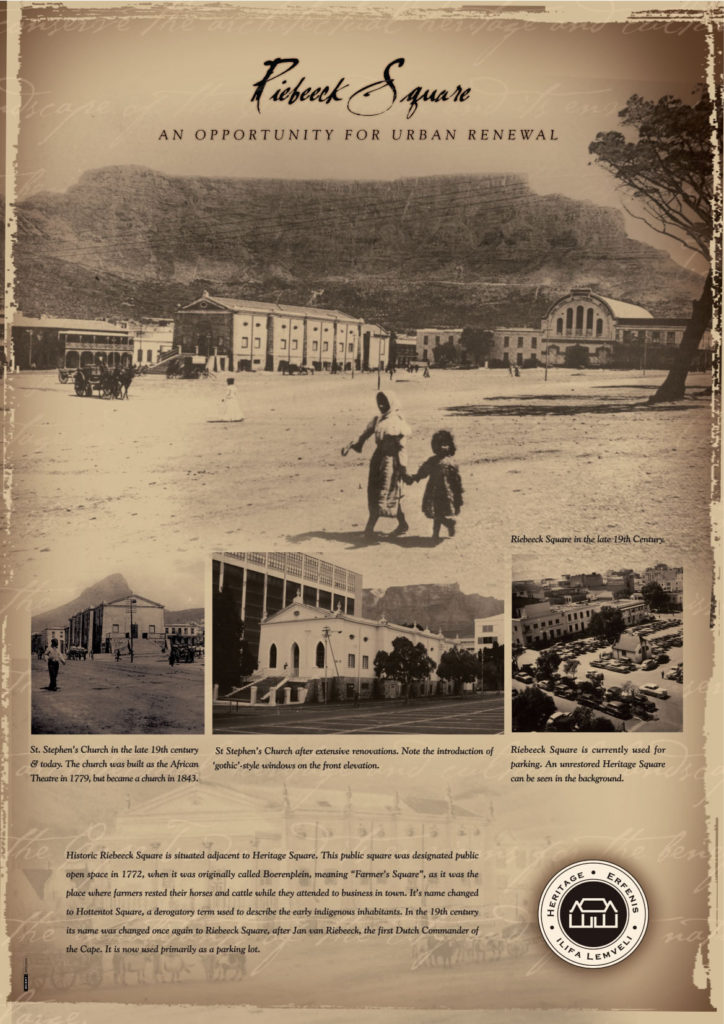 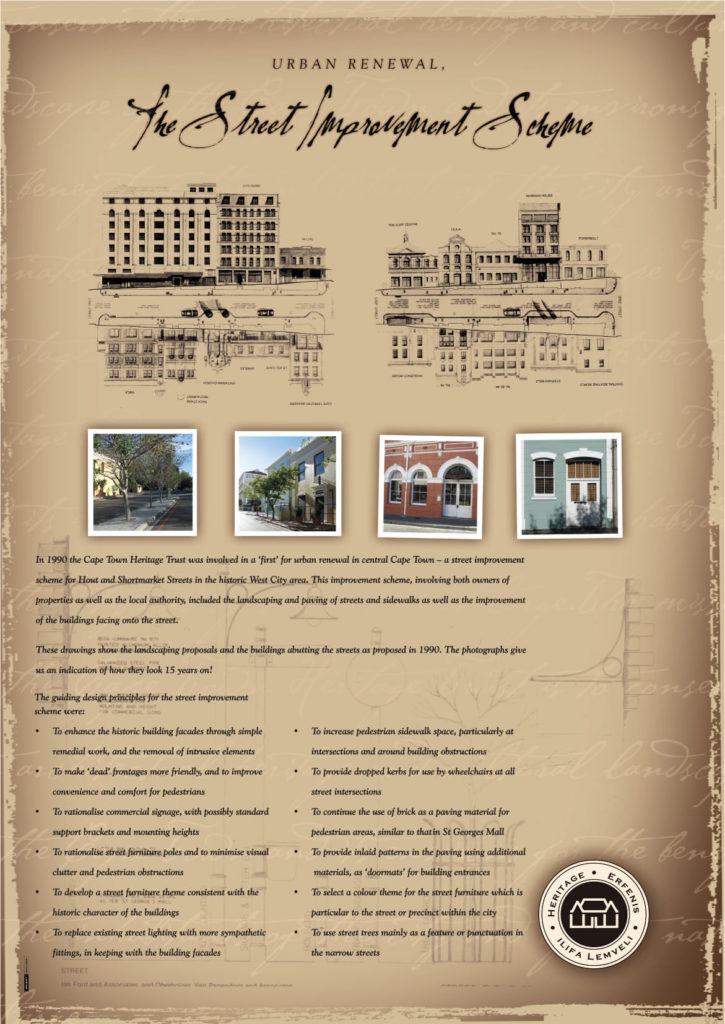